Close to You: A Downside Ghosts Story (A Heroes and Heartbreakers Original)
Stacia Kane The premise was delicious: the lady is rather horrified to discover that she's got the feelz for the land steward, who in turn realizes that his employer's flighty aristo ways are just an affectation.  Then the villain turned absurd, and the hero never let the lady speak her mind or try to solve conflict - he would just shove his tongue in her mouth while pulling up her skirts. That oughta shut 'er up!

It all stayed very shallow, and Harry turned into a pushy alpha.  I missed the swoonworthy beta from the opening chapters.

Elizabeth Hoyt and Lisa Kleypas share the same space on my shelves. They are very readable, but I am always aggravated with the inevitable villain subplot, which is generally used to push the MC from lust to love. LK wins the cage match easily - she's wittier with dialogue, and has Leo Hathaway and Christopher Phelan in her corner.

duped by chapter 1 hoyt where have all the betas gone

The Keeper Shelf, slot #1: Son of the Morning by Linda Howard 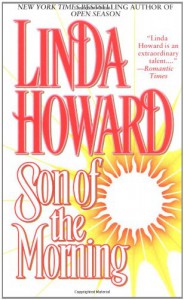 When I worked in publishing many moons ago, I plucked this paperback out of the freebie bin. It was my first romance, beyond reading "Princess Daisy" with my middle school besties. I told my pretentious roommates that it was just for the snark factor, but girl please, I was a goner from the first page.

There's very little this book doesn't have, beyond maybe some restraint.  You've got suspense, a plucky heroine surviving on the run, time travel, the strongest, hottest Highlander in all of Christendom, and two nearly star-crossed lovers beating the odds and getting their HEA after all. Brilliant.

Yes, some of it is truly clunky: the villain is over-the-top pervy, and he gets his in a weirdly lewd way. The hero does in fact speak in that annoying spelled out broooooogue. And the heroine skirts dangerously close to Mary Sue territory. Poor Grace is just not MEANT to be in modern times - she loves simple bland foods! (?)  She is also one of those heroines initially deemed unpretty for very gorgeous reasons. Why, her eyes are just too large and grey! Her mouth too wide and full! Her hair is just too long and thick and silky! Given when it was written, she is Christy Turlington disguised as a computer nerd. BUT. But. It's SO FUN! I mean, her flight from the villains, is uber tense and thrilling. Her frantic research, conducted on the run, is kind of awesomely interesting - made even cuter by the 1990s technology of modems, etc. And she has fevered sex dreams about Black Niall, who is described like our favorite blockbuster hero: Niall is a 1990s alpha, my favorite kind.  He is calmly, dangerously in charge, and treats Grace with intelligence and respect, even as he tells her in no uncertain terms that she will soon be in his big ole fur-lined bed.  I miss those heroes - alphas these days are misogynist knuckledragging morons.  In fact, if this was written today, the pervy villain would actually be the hero - he's handsome, rich, and a sociopath.  Swoon!

Many romance readers complain that Grace and Niall don't get together 'til way late in the book, and it's true.  I probably would have felt the same way if I hadn't been a romance virgin.  I picked it up thinking it was a paranormal thriller.

Even when they are finally face-to-face, the widow doth protest a bit much despite her near constant orgasms in her fated lover's presence.  But the big scene on the stairs, oh, wow.  Smoking. Hot.  My jaw dropped and I probably turned scarlet reading it on the subway.  I've read a lot more explicit scenes since then, but I still appreciate the unadorned action.

I get why some people don't like this one, but it will always be one of my favorites. I read it every year or two, and still love it.  It's just unapologetically bananas. Softly sweet and romantic - featuring a couple you can really root for!  Sometimes, you just KNOW after a week of rough unprotected sex that you have found your true love...or your barely legal old lady whore bitch (what? I am just being AUTHENTIC.) who tucks her cigarette pack in the waistband of her sweatpants...swooon.

I never thought it would happen, but I found the book that makes me think fondly of Motorcycle Man by Kristen Ashley.

Just reread this, and it's even better after all the NA tripe out there. It was a bit over the top with the villain, but I have to overlook because the romance was so fabulous.
Tweet 3.5 stars. Don't be fooled by the SEALS (SWAT, actually) coverboy and his big gun(s) - this is a straight contemporary romance, with a refreshingly no nonsense heroine. She is like an amazing alien. I loved that she had zero time for bullshit - it was a great counterpoint to her supreme innocence and sheltered existence. Because of her, I liked this more than I thought I would, because Ben kind of sucked, and the set-up bugged me. The bulk of the plot centers on a weekly schedule of identical hook ups where the gal is shown the door before the condom hits the trash. Then it all wraps up with a speed-courtship that's all about the tell and robs the reader of the emotional payoff. Would have much preferred the reverse: an A-Team video montage of the hook-ups, and then a little more detail as she figured out her next steps after moving on from her sheltered life. I also can't buy the HEA - should be a HFN.
Tweet Horrible audio version. The male narrator had a high, breathy take on the hapless virgin, and his hero was a bit too refined and arch, almost fey, so it really did seem like a parody. The slowly paced audio just highlighted the unimaginative retread - I was guessing the adjectives and dialogue as I went along - which maybe could have been a fun game, if it wasn't so boring. I'd rather listen to Lair of the Lion again, which is saying something (me so tawny!). DNF at about 20%, or long enough to finish my Sunday night chores.
Tweet So the fairy tale prince for a domestic abuse survivor is a pushy alpha male ex football player with a possessive streak, a giant temper, and a pathological need to get his way? Perfect. The conflict was refreshingly realistic for a romance novel, I suppose, but oh lordy, it took so long to get there, particularly with the audio (Susan Duerden, s l o w l y enunciating every single syllable). I finally had to give up at about 70% - never got to the actual big fight and tower scene, but I was already weary of Edie, who was kind of awful to servants...and Gowan. Poor Gowan. DNF
Tweet I had a hard time with the first half - it felt forced, wasn't all that charming, and the typos and nickname "Tommy" did not help. And on top of all that, the never ending series rehashing was excruciating. It got better, but I was disappointed in this one.
Tweet This started out great - Cora was reminiscent of a Joanna Bourne heroine, but even tougher and more tortured/damaged. She was also fully embedded in her role, pun intended, instead of those cop-out virgin lady spies that seem to run rampant in these kinds of novels. But the inappropriate boners and shmoopy talk was really embarrassing, especially with a dude named Guy. He was so smug and pushy while invading a truly messed up woman's space. I felt like a cornered tiger reading, so finally called quits.
Tweet I learned after the fact that Park is a bratty-author-to-avoid. Given the annoying FB status updates in the book, this should not surprise me. The big mystery was obvious, though that may have been done on purpose. Julie was very self(over)confident, feeling righteously justified in blundering into what was obviously an extremely damaged family. It all made sense though, she was 18. Take away the implausible romance, and instead give Julie a much-needed wake-up call re: her judgemental self-centered attitude -- and this would be a great coming of age book.
Tweet Most of the juicy stuff happened offscreen (meaning the PLOT not the highly inappropriate groping pre-bath post-coma). The reconciliation and hero's redemption seemed a bit too pat given that we are led to believe that the poor bedraggled but proud heroine had been penniless, in mortal danger, and worse I do not take kindly to presumed dead babies, thankyouverymuch thanks to her beloved's lack of trust and snap judgement. Some fun secondary characters, so I will give it three stars, but I really was itching to edit the heck out of this one, starting with the very first sentence, and the last pages made me ill with the embarrassing cutesy love talk epilogue.
Tweet My first Brockmann. Cute secondary romance (now that's how you write good NA characters), and fairly interesting WWII flashback storyline with Charles and Joe. I wasn't a fan of all the rest - the suspense plot was dumb, and the central romance was lame. I despise that particular trope (longing for the one that got away in high school).
Tweet

Did not like this much - the characters left me cold, and the plot seemed weak, especially at the end.
Tweet This was sweet - basically a love letter to fans, who were clamoring for a bit more Terrible. Definitely a fun read for Downside devotees, and a nice escape from Chess's POV. I have this tiny bit of unease about it...but it's hard to put into words. Chalk it up to a reader's possessiveness about a favorite character.
Tweet